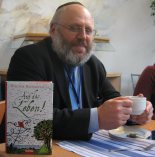 Rabbis need to write a lot – letters, essays, sermons, articles, Torah commentaries, responses to religious questions, speeches and more. I write a lot – and have done since I was young; I write because I have to. Seriously.  Some brief examples I have enclosed to this website. The ideas come and they need to be worked on, teased out, sometimes checked against other ideas and facts – and written down. Thank heavens for laptops!

I write many short stories, some of them very serious and based upon my own and colleagues' experiences as Rabbis; some are more light-hearted, some are parodies. For many years my children demanded a new story every night and they usually got one! I write history (especially railway history) and biography, poems, songs, book reviews, parodies and more. I have published many articles in newspapers – some can be found on this site under 'Torah Portions'. Over the years several books have appeared (and others are being worked on); many are still available either as hard copies or as e-books. These include:

'Tales of the Chutzper Rebbe – a Selection from the Acidic Anthology' – this appeared in 1997 in California (pub. 'Alef Design'). It includes tongue-in-cheek parodies of some of the classic Chasidic tales which are so often so earnestly cited.

'99 Fragen zum Judentum' – appeared from 2001 in three editions (the third in 2005), with a German translation by Götz Elsner; It is still available. Also as an e-book. This paperback atttempts to answer, in a light yet comprehensive manner, the questions which so frequently come up in interfaith encounters.

This has also appeared in Italian as '99 domande sull'Ebraismo',

'Auf das Leben' is a book of rabbinic short stories, translated into German by Miriam Pressler and illustrated by Oliver Weiß, published by Goldmann Verlag, München, 2008, ISBN 978-3-442-31185-9. This has also appeared in Korean. The German version is currently only available second-hand but I hope to produce a second edition soon; the English version will hopefully be expanded with companion volumes as resources allow.

Some of the stories, published in "Auf das Leben", but also some new ones, have been published as 'Tales from the Rabbi's Desk'  Vol. 1 (Kulmus Publishing, London 2015; ISBN 978-0-9880539-2-2; 208 pp.) Of these stories I can say that they are not exactly 'true' but they are 'authentic' – they are based on the things one experiences as a Rabbi, but I have modified and altered the stories to make those concerned less identifiable.

'Der Honig und der Stachel' is a thick textbook (432 pages) covering almost everything one could wish to know about Judaism but presented from a realistic Reform or Liberal European perspective – so many of the Guides to Judaism are either Orthodox and/or American and do not reflect the realities of life here. It appeared in Gütersloher Verlag, 2009, ISBN 978-3-579-06528-1.

'The Bookcase of Sherlock Holmes' is a small e-book with three segments in English and forms a 'different' tongue-in-cheek view of Sherlock Holmes and his faithful partner Dr. John Watson and the Victorian London in which they lived and worked – with its weather, its crowds, its lowlife and shady corners.

During my time in Aruba I researched and wrote a 'History of the Jewish Community in Aruba' – this was privately published; examples are in the libraries of the Hebrew University and the Joods Historisch Museum, Amsterdam.

A brief biography of Rabbi Dr. Erich Bienheim appeared in 'Great Reform Lives' (MRJ, London 2010) and a fuller biography of this man, my first rabbi and teacher, awaits publication; as does a full biography of my grandfather Herr Landgerichtsrat Walter Fritz Rothschild (1890-1950). Several articles have appeared in the 'CCAR Journal' and I have published many other chapters in 'Festschriften' or edited collections, plus essays and articles. Many other items await publication.