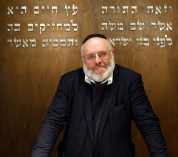 Being a Rabbi is what I do and what I have always wanted to do. There are of course different ways to be a Rabbi – sometimes in a congregation, sometimes outside, in various social and educational institutions. Since I myself grew up in a small congregation (in the North of England) comprised largely of immigrants and refugees from Central Europe, I feel quite at home officiating at services in small and informal settings. Some of the Progressive congregations I have served in Germany have met in a cellar under a church, in a dental surgery waiting room, in the former foyer of a cinema, under a canopy in a garden..... I can officiate at services and life-cycle events in hotels and conference centres – one does not need a large and formal building, one does not need all the ritual furniture that can be found in a large synagogue built for that specific purpose. From the time I was Bar-Mitzvah at age 13 (in May 1967) I led services on a rota at my small congregation which, for many years, could not afford its own full-time rabbi. From there to leading informal services for youth groups, student groups and young adult conferences was but a small step. During my rabbinic studies at Leo Baeck College (I was ordained in summer 1984) I served internships in one community which met in a Methodist church hall and another which met in a converted fish and chip shop! What is important is what the people concerned bring to a service, their interest, enthusiasm and commitment. One can lead a service without being dressed up in a gown or berett, one can pray from photocopied sheets as well as thick books, one can sing without needing a cantor, an instrument and a choir.

Following my ordination I served for eleven years in Sinai Synagogue in Leeds – which meant also serving the small communities in Bradford (my home) and Hull, and establishing a new community in Sheffield, and helping a small group in York which has since developed further. Over the years I helped build up a northern group of Reform Rabbis and even a northern branch of the Reform Beit Din. Being the only Reform rabbi in the entire region for many years this also meant calls to perform burials and cremations all over the North-East (and even the Lake District), visiting prisoners in Leeds, Wakefield, Lindholme etc., answering the calls from students in many institutions, and more. It was in this period that I also prepared a series of twenty leaflets 'Aspects of Reform Judaism' and a series of worksheets which gradually formed what became a book 'Jewish by Choice' in 1994.

Later I commuted to Vienna for some years, served a congregation in Oranjestad on the island of Aruba in the Netherlands Antilles and in 1998 was 'called' to act for some years as Liberale Gemeinderabbiner in Berlin (this meant working in five different synagogues at the same time! - Pestalozzistrasse, Oranienburgerstrasse, Rykestrasse, Herbartstrasse and Fraenkelufer. These were and still are all different, use different prayer books, have different customs and traditions; I had to work with different cantors and different melodies; only one is 'egalitarian'. This formed quite a challenge!

Then, whilst staying in Berlin, I began to commute to the progressive congregations 'Beth Shalom' in München, 'Synagogengemeinde' Halle/Saale, 'Gescher' in Freiburg/Breisgau, 'Gescher LaMassoret' in Köln – this meant being somewhere else every weekend – and then building up a Landesverband of five communities in Schleswig-Holstein, north of Hamburg (in Bad Segeberg, Pinneberg, Elmshorn, Ahrensburg and Kiel) – here we established cemeteries, acquired prayer books and Sifre Torah, built up links with local political and religious organisations, acquired premises and much more. For some years I was also a member of the Executive of the Union of Progressive Jews in Germany, responsible mainly for matters of congregational development and liturgy. I am currently serving as the Rabbi for 'Or Chadasch' in Vienna, Austria and am also involved in a voluntary capacity with an Egalitarian Minyan in Berlin.

The point is that in Europe there are many smaller communities which need rabbinic guidance and support but are unable to support a full-time post. Since this is exactly the Jewish world in which I grew up, I feel at home with this style of work, even though it often means compromises. (I cannot be everywhere at the same time!)

Now that I have fewer congregational commitments and more time, I am happy to come to different communities for services, discussions, seminars, conferences, readings and concerts; I am available to officiate at Bar- and Bat-Mitzva ceremonies and to perform Chuppot (although, please note, to avoid embarrassment: Whilst I am happy to meet with mixed-faith or same-sex couples to advise and counsel them on what to do, I do not officiate at such weddings.) I am also often available to officiate at funerals, stone-settings, the dedication of Stolpersteine and other memorials. The costs and fees will vary according to the situations, the time required for travel, the amount of time spent in preparation, etc.

One of the more recent sides to my activity is advising Film companies - for example, for the television detective series 'Tatort'  - which sweeps the streets clean every Sunday evening. The episode on 11th. December 2016, at 20.15 on 'ARD Das Erste' channel is subtitled 'The Bar-Mitzvah' - a part of the plot involves a Jewish woman detective in Berlin who is organising her younger son's Bar-Mitzvah - an egalitarian service of course - but who then has to balance her attendance at this service - her free day, off duty - with the urgent need to save the rest of the world from Evil in the way only she can! Those characters who do not end up waterlogged or riddled with bullets live happily ever after - fortunately the Rabbi at the Bar-Mitzvah is one of these. Originally brought in to advise the script-writer and Director, both as to the plot, the location, set-dressing and the loan of ritual items, I was then asked to take on the role of Rabbi myself and did so with relish. This link leads to a brief trailer and interviews with some of those involved - in German.

As a Rabbi and Theologian I am primarily interested in Biblical Exegesis and in Liturgy and in comparisons between Jewish and Christian traditions and texts. (I am also happy to meet with Moslem groups for dialogue but have less experience or specialist knowledge in this field.) Of course in the modern world a major role for rabbis is to explain Judaism to interested non-Jews, some of whom may even be interested in Conversion to Judaism. For this purpose I have also written 'Der Honig und der Stachel' (published by Gütersloher Verlag in 2009) and in 2016 a revised and expanded English version 'The Honey and the Sting' (pub. JVFG, London). These cover not only the usual topics of the worship, the calendar, the life-cycle but also personal views on many of the less attractive aspects of Jewish life and history – hence the 'Sting' in the title. It is important to be realistic – not everything is sweet.

I am a member of the ERA (European Rabbinic Association), an associate member of the CCAR (Central Conference of American Rabbis) and of the Allgemeine Rabbinerkonferenz in Germany (ARK).

I can offer professional rabbinic counselling, coaching and guidance (NOT therapy) – at an hourly rate.